There are a lot of great moments going on in our musical family. This is our digital scrapbook page. Enjoy!
2019 National Piano Diploma  Award:
Congratulations to Sanjana! She earned her piano diploma in June from the American College of Musicians. She is also receiving her Congressional Medal. Well done! 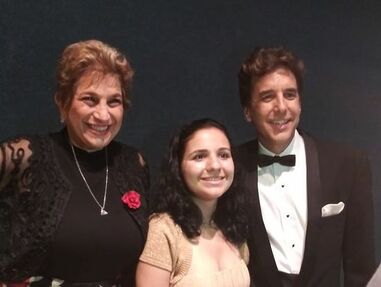 ​Congratulations to Daly! She was awarded a grand piano by the Steinway Society of Central Florida. This is a non profit organization that helps deserving piano students with scholarships and pianos. Daly performed on stage at the 2018  Divas with Michael Andrew in Concert at the Orlando Museum of Art, featuring National and International Entertainers. This annual event sponsored by the Steinway Society of Central Florida raises money for the organization to be able to provide scholarships and pianos to students.  Daly pictured here at the concert with Carol Stein and Michael Andrew.

Aaliyah and Daly earned their High School Diploma in Piano from the American College of Musicians. They played several advanced pieces from memory and were tested on their knowledge of music. Congratulations!
June 11 and 12, 2017, we hosted the Guild Auditions at Music N More. Students received National and State Certificates. They are now members of the National Fraternity of Student Musicians. Congratulations!
June 3, 4 and 5, 2017, we hosted the Royal Conservatory, Music Development Program exams for Central Florida at the University of Central Florida. Students performed for the examiner and will receive their grades in a few weeks. The is a music certification program.
June 3, 2017. Students participated in the Spring Recital at the University of Central Florida. We had 3 recitals that day. Congratulations on a great performance!

​
​Update on Brian Inerfeld. He won the gold medal in the vocal competition event of the Take It To The Top Talent Competition. This is new national talent competition presented by Music N More and Galaxy Orlando Entertainment. He has 2 singles on Amazon and a new music video. He toured Japan as part of the new group that is being put together by the producers of the Backstreet Boys. Congratulations Brian!